Satan, A.K.A the Devil or Mr. Zebub, is the lord of darkness and the king of Hell. He can take the form of a devilish, demonic creature, a Teddy Ruxpin doll, and several men. He is best portrayed by Malcolm Ray. Prior to his appearance, Bennett the Sage was said the be the devil, as shown in the Nostalgia Critic's review of Care Bears 2 (though it was revealed that this was just Sage screwing with the Critic). He has a daughter named Evilina. 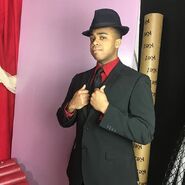 Satan at the Devil Boner and Hyper Fangirl wedding

Satan in the elevator with the Nostalgia Critic, Santa Christ and Rita Repulsa

Add a photo to this gallery

Retrieved from "https://thatguywiththeglasses.fandom.com/wiki/Satan?oldid=128338"
Community content is available under CC-BY-SA unless otherwise noted.