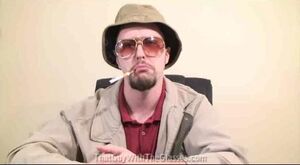 Raoul Puke wears Hunter S. Thompson's trademark sunglasses, and like him always has a cigarette in his mouth. The rest of his clothes are what Johnny Depp wore in his portrayal of Raoul Duke in Fear and Loathing in Las Vegas (hat, red shirt, beige jacket).

Retrieved from "https://thatguywiththeglasses.fandom.com/wiki/Raoul_Puke?oldid=26419"
Community content is available under CC-BY-SA unless otherwise noted.