According to the official website, "Press Start Adventures" is an "animated videogame parody series" based off a live-action movie called "Press Start." Produced by Dark Maze Studios, it began life as "Press Start: Bonus Levels," which was created while the film was in its production stages. The series was made to introduce people to the world and characters, as well as tell stories and introduce characters that didn't fit with the budget or scope of the film.

The site says that after the movie was complete, the series was retitled to "Press Start Adventures" and quickly became a hit on its own. The first season of the series leads up to the movie, with the second season taking place after it. The series is produced/directed by Ed Glaser and written/animated by Kevin Follard, with music by Jake Kaufman.

The series also has many videogame guest stars who joined the cast, including John Turk (Sub-Zero from Mortal Kombat 3 and MK Mythologies), David Humphrey (Shadow the Hedgehog from Sonic Adventure 2 and Sonic Heroes), Robert Belgrade (Alucard from Castlevania: Symphony of the Night), and many more. 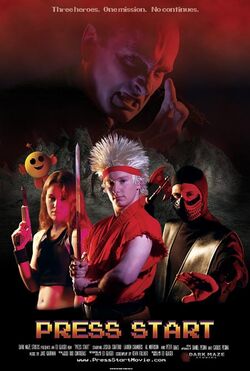 Ed Glaser’s original idea was to make a parody that was essentially "Videogame: The Movie!" He envisioned a mishmash of videogame genres, with jokes and references piled upon themselves as the protagonist came to grips with the fact that his normal world had started to behave like a videogame. He carried that idea in the back of his mind while working on other films and searching for someone to write the script.

He found that someone in Folliard, who had worked with Glaser on other projects. An avid videogame fan as well as a funny writer, Kevin seemed like an ideal choice, and was immediately interested when Ed mentioned the idea. A couple months later, when Ed suggested that they start on the project, he was surprised and delighted to find that Kevin was already several scenes into a draft.

“Kevin took my original vague ideas and made them his own.” Glaser commented. “He took the parts that worked and reshaped them into something far better than I’d developed.”

The movie takes place in between the first and second seasons of "Press Start Adventures." It follows Zack Nimbus (Joshua Stafford), a typical suburban youth and volunteer monster exterminator living peacefully in a videogame world. It’s a realm where people actually do cross rivers by jumping across alligators’ heads (or being chomped to death in the attempt) and where injuries can be cured by eating food found laying about in old hallways. Here, the pleasant days are ending due to world conquest by the unspeakably evil but insecure and telephone-addicted wizard, Count Nefarious Vile (Peter Davis). Zack soon finds himself recruited by battle-hardened space soldier Sam (Lauren Chambers) and enthusiastically bad-tempered ninja Lin-Ku (Al Morrison) to join a last desperate attempt to thwart Vile’s imminent victory. But not before lampooning every videogame convention that comes their way.

Press Start was produced and directed by Ed Glaser and written by Kevin Folliard. It’s the first film in which people who actually create videogames take part in spoofing themselves. Among them are Daniel and Carlos Pesina, veteran martial artists featured as live action characters in the Mortal Kombat I and II games. Daniel portrayed Johnny Cage, Sub-Zero and Scorpion while his brother Carlos appeared as Raiden. Providing the original soundtrack is composer Jake Kaufman, who scored the music for games such as Shantae and Contra 4.

When "Press Start" became a featured contributor on TGWTG. Glaser said, "I was a big fan of the site and Doug's videos, and I saw at the time that they were looking for new content. So I shot Mike an email introducing myself and suggesting that PSA might be a good fit for the site if he was interested. And the rest is history!"

Retrieved from "https://thatguywiththeglasses.fandom.com/wiki/Press_Start?oldid=100362"
Community content is available under CC-BY-SA unless otherwise noted.